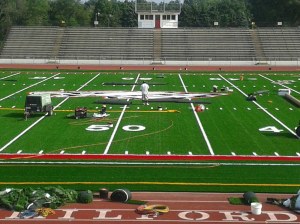 On Friday, September 6, 2013, the Milford Athletic Boosters (MAB) and Milford Schools christened the new artificial turf football field at halftime of the first varsity game of the season.  After a game that the Milford Eagles won in triple overtime, students stormed the field to celebrate the win and the turf with the team.  “It was a heck of a way to christen the new field,” laughed Dave Meranda, President of the MAB, at the September 19 school board meeting.

The turf is a 100% privately funded project by the MAB, and at $657,695, represents the single-largest donation the MAB has made to the district. 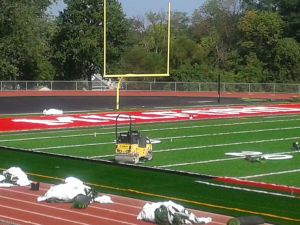 Having artificial turf on our football field is a benefit to the district and community in a number of ways: 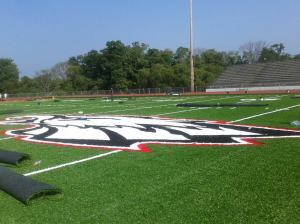 The Milford Eagle is in the center of the field

This project is a long time coming; discussions about how to fund artificial turf have been taking place for years, and the MAB first began talking about a district-MAB partnership before I was a school board member.  Then-board member Gary Knepp encouraged them to consider how to do the project with 100% private financing – an idea the MAB embraced.

Three years ago, the first plan was presented for financing and managing artificial turf.  As with any large, new project, there were still many questions.  Both Gary and I pushed the district and MAB for buttoned-up answers.  In fact, we would not support the project in any form until all those questions were answered, which happened this past spring prior to the MAB announcing they would start the project.

The MAB, Milford’s Activities Director Mark Trout, and Milford’s Operations Manager Jeff Johnson did a great job looking at issues and contingencies, developing a sound plan for renting, maintaining and replacing the field.  There will be growing pains, of course, but this is a true example of a parent organization, private companies, and the public school district coming together for the benefit of our community and students.

Congratulations to us all!

1 thought on “New turf is welcomed by teams, students & community”