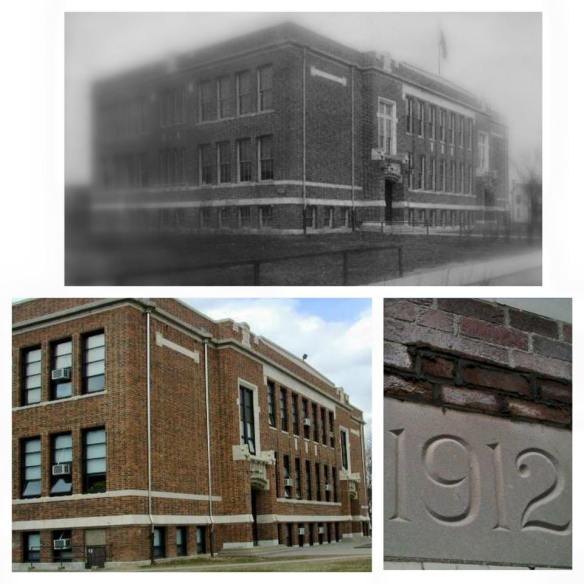 Top: one of the oldest photos of Milford Main, courtesy of Bill Stockland, MHS class of ’63 and his http://www.billstocklandphotography.com/. Thanks also to Marvelous Milford (linked to photo) for use of the photo collage.

Last July, the Milford School Board accepted an offer of $250,000 from Jim Cohen of CMC Properties (the developer of Milford’s Riverwalk development) to purchase Milford Main for development, based on the contingency of receiving zoning for his proposed usage. He outlined a plan called Milford on Main, a senior apartment complex that would host 92 units on the Milford Main site. He would have memorialized the façade of the current Main building by constructing a bell tower using the “Boys” and “Girls” elements from that building.

In February/March, Milford City Council turned down the zoning change required for this new construction. Shortly after that, Mr. Cohen returned Milford Main to the District.

At the March 19 meeting, Dr. Farrell and Business Manager Jeff Johnson reviewed what had happened with Main to bring us to this point. The Board is asking that any proposals, including a financial plan to make the proposal happen, be submitted to Dr. Farrell either through email or to 777 Garfield Ave, Milford, OH 45150.

While the Milford Main situation has been reviewed by several committees over a period of at least 8 years, the most recent evaluation came from the Business Advisory Council (BAC) starting in September 2012. The BAC Chair at that time was Tom Rocklin; the Council had eight members.

At the time, Milford Main was operating with several tenants that offset basic daily operating costs. As an average over several years, the District broke even on these operating costs. The BAC evaluated the age of the building and what large maintenance needs would be coming up, and they recommended reviewing site options with a group of developers. Jeff Wright, Milford City Manager, led that process.

The BAC and developers looked at many options: putting the building up for sale; pursuing a property grant with the City of Milford to divide and distribute the property; and tearing the building down. The conclusion was that, although the building is a beloved community icon, Milford Main’s usefulness as an educational building has expired, and costs to renovate exceed the potential for revenue.

In late 2013, the BAC re-formed with several new members. Mr. Rocklin stayed on as Chairperson. In January 2014, he presented the committee’s recommendation: that the Board begin the process of selling the property through auction.

According to the BAC’s report, the cost to maintain the 100-year old building was being offset by tenant revenue, but this amount would not accommodate any major maintenance need. Should that occur, funds would have to be diverted from the District’s general operating fund, which is already tight. At the time, roof repairs of $15,000 were needed.

At that time, Dr. Farrell began the process of appraising the building and removing/preserving/relocating the Rookwood fountain and the mural. The Board also began plans for a community forum to receive public input.

On March 3, a community forum was held on “Options for Milford Main” at Mulberry Elementary. Appr. 25 community members attended. The BAC continued to receive input from community members through the next few months. No plans with financial resources to make them happen were received.

On April 17, 2014, the Board of Education passed a resolution to place the current Seipelt Elementary and Milford Main buildings and properties up for auction. Ohio law requires that assets such as property are placed for auction before any private sale can take place. The auction was advertised in the Enquirer through an ad for two weeks.

On May 19, 2014, the District held the public auction for these two buildings. The auction was attended by 12 people, but there were no bidders. Since an acceptable bid was not received, the Board of Education then had the option to proceed with private sale.

At this point, the First United Methodist Church presented a concept to the District. There has been a great deal of misunderstanding about what they offered. To clarify: there was no plan and no funding. The Church was interested in taking on the land to expand their parking, but they did not have any resources to make this happen.

In June 2014, a postcard went out to the entire community regarding the auction and private sale of Main and Seipelt. On July 3, 2014, the Board approved a purchase agreement for both the land and the Milford Main school building from CMC Properties. This contract included a purchase price of $250,000 with $5,000 earnest money. The contract was contingent upon inspections and zoning. CMC shared they were seeking feedback from the community concerning future uses of Main. Jim Cohen talked with several community members and placed a large sign on the Milford Main property, asking for input and providing a phone number.

That brings us to a few weeks ago, when Milford City Council denied the sought zoning changes and Jim Cohen returned the building to the District. Over winter break, some of those “major maintenance needs” forecasted by the BAC in January 2014 began to occur: a boiler went down and must be replaced; roof leaks increased; and just as of last week, the second boiler went down. Capital issues continue to build, but since the District has no plans to use the building ourselves, and any company/organization that purchases the building will either need to renovate or tear it down, we will not invest in fixing these.

Because of this, as of last week, all renters were informed they must be out of the building by June 1. The Clermont County Autism unit will be moving to the District’s Milford Miami building (on Rt. 28 where preschool is held), and Fit 4 Kids has found a new home in Milford. I believe the smaller tenants are still looking for new homes. In the meantime, we are hoping to be able to provide enough heat through these early spring days to make it comfortable for those in the building.

The District is investigating adding Milford Main to the Master Construction Plan, which, if we decided this was the best option, would allow us to tear down and remediate the building (cost estimated at $900,000) and receive up to 27% back on that cost from the State. While this cost would not come out of local funds, these are still taxpayer dollars, from all across the state.

Over the past month, the District has been approached by several groups/companies interested in taking on the building and/or land. No plan that has the required financial support has been presented.

2 thoughts on “Update on Milford Main; no plans w/funding have been offered”